All BSA's decisions on complaints 1990-present

[This summary does not form part of the decision.]

The Authority has not upheld complaints from 20 complainants about a segment of Punjabi talkback programme, Bhakhde Masley. During the programme, the host questioned the teachings of a deceased Sikh religious figure by posing hypothetical questions about how he and his widow, now also deceased, had children. The host implied that, given the leader’s teachings about celibacy, his widow and other family members must have had sex with animals. The complainants alleged that this discussion breached the privacy of the individuals referred to, and was degrading and humiliating. The Authority acknowledged that the segment was in poor taste, but found that the broadcast was not in breach of the standards raised by the complainants. The individuals referred to were either deceased (so the privacy standard could not apply) or lived overseas, making it difficult to assess the harm that could have been caused. The discussion was ultimately hypothetical and was not intended to be taken literally. The Authority noted that the right to freedom of expression comes with responsibilities by those who exercise it, and it is clear that this broadcast caused offence and significant division within the Sikh community in New Zealand. On this occasion, however, the Authority could not uphold the complaints based on the particular standards raised.

The broadcast and background

[2]  As this programme was broadcast in Punjabi, we sought an independent translation and transcription of the relevant segment. According to the translation we have been provided, during this broadcast segment, Mr Singh discussed with a caller to the programme the religious principles adopted by Jarnail Singh Bhindranwale, a Sikh priest and a controversial, but widely revered, religious figure. We understand that Bhindranwale was married to Pritam Kaur, and the couple had two sons. Bhindranwale was killed on 6 June 1984 and it appears that his wife, Pritam Kaur, died on 15 September 2007.

[3]  According to Mr Singh in the broadcast, Bhindranwale, who was the ‘chief of the Taksal’, taught his followers that the chief does not have sex with women. Given these teachings, Mr Singh went on to ask how Bhindranwale and his wife, Pritam Kaur, had children. He asked: ‘…did she [Pritam Kaur] give birth to them by some donkey, bull or through somebody else?’ He went on to question how other daughters in the faith, and Bhindranwale’s sons, would have children and whether their wives would ‘sleep with bulls’.

[4]  The Punjabi transcription of these sections of the broadcast, provided to us by the Translation Service at the Department of Internal Affairs (DIA), read: 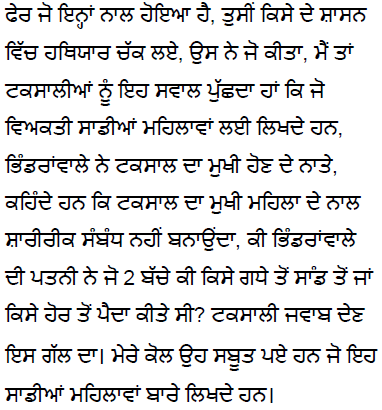 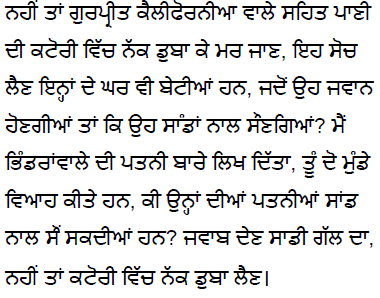 [5]  We received 19 privacy complaints about this broadcast, which were made directly to the Authority. These complainants submitted that:

[6]  We also received one complaint referral about this broadcast, raising the balance, accuracy, fairness and discrimination and denigration standards, in addition to privacy. This complaint was not upheld by Radio Virsa and the complainant chose to refer their complaint to the Authority for independent investigation and review. This complainant submitted that:

[7]  In response to these complaints, Radio Virsa submitted:

Overview of findings and freedom of expression

[10]  We acknowledge that, due to Pritam Kaur’s and Bhindranwale’s religious positions, the specific comments complained about were in poor taste and caused offence to a large section of the Sikh community in New Zealand. However, we must apply the standards that have been raised by the complainants and, in this case, we have found that the standards raised have not been breached.

[11]  The item was ultimately hypothetical and was intended to critically question religious teachings. In our view, these were not allegations against the family intended to be taken literally. In this case, it is difficult for us to assess the harm that might have been caused to the individuals referred to, given the individuals discussed are either deceased or live overseas, and have not raised complaints themselves.

[12]  We are concerned that this broadcast has caused significant division within the Sikh community in New Zealand. However, our role is narrow and limited by the Broadcasting Act 1989. We respond to formal complaints that broadcasts have breached broadcasting standards. The scope of those standards, and the actions that we can take in response to complaints, are therefore prescribed for us in legislation.

[13] On this occasion, we are unable to uphold the complaints, for the reasons set out below.

[14] The privacy standard (Standard 10) states that broadcasters should maintain standards consistent with the privacy of the individual. The standard applies only to living natural people.2 As both Bhindranwale and his widow, Pritam Kaur, are deceased, the privacy standard therefore does not apply to them.

[15]  We further do not consider that the broadcast disclosed private information about Pritam Kaur’s and Bhindranwale’s sons, daughters-in-law or grandchildren and it is highly unlikely that these individuals could have a reasonable expectation of privacy over the information discussed, given its hypothetical nature. The conversation was primarily concerned with Pritam Kaur and Bhindranwale, with the family discussed only as an aside. Taken in context, therefore, we do not consider Mr Singh’s comments disclosed any private information about the individuals referred to.

[17]  We do not consider that the remaining standards raised were breached during this broadcast, for the reasons set out below:

[18] We therefore do not uphold this complaint.

For the above reasons the Authority does not uphold the complaint.

Signed for and on behalf of the Authority

The correspondence listed below was received and considered by the Authority when it determined this complaint:

1 During the segment, Mr Singh refers to ‘Taksal’ and the ‘Taksalis’. We understand that this generally translates to an education institute or community of students, who associate themselves with a spiritual leader. It appears that during this broadcast, Harnek Singh is talking specifically about the Damdami Taksal, a Sikh educational organisation in India, and its former leader, Jarnail Singh Bhindranwale.

6 The discrimination and denigration standard (Standard 6) protects against broadcasts which encourage the denigration of, or discrimination against, any section of the community on account of sex, sexual orientation, race, age, disability, occupational status, or as a consequence of legitimate expression of religion, culture or political belief.

The Authority has not upheld a complaint that an item on 1 News, about claims from the Department of Conservation (DOC) that staff had been abused and attacked by anti-1080 protestors, breached broadcasting standards. The Authority found the item was unlikely to mislead or misinform audiences, as it contained comments from various parties including a DOC representative, an anti-1080 campaigner and a National Party MP. The Authority highlighted the importance of the reporting on issues of public importance in an accurate and balanced manner, finding that the broadcaster did so on this occasion.