BSA news and media releases including the BSA Pānui newsletter

All News and Media Releases

The Broadcasting Standards Authority (BSA) has today released research which explores how depictions of nudity on screen in different scenarios may impact or harm children and young people.

A literature review conducted by The Collaborative Trust found that there are a limited number of local or international studies that refer to plain nudity on television and its impact on children and young people. Some studies found nudity on screen that is educational can provide a positive context for sexuality education. A small number of studies that looked at nudity in the artistic context proposed that this can help reframe nudity as a positive discourse.

Key insights from the studies about impact of sexual media content on children and young people include:

The BSA has identified a range of actions that broadcasters, parents/caregivers and the BSA can take to respond to these findings, including:

The BSA has also released its annual litmus testing research which explored the public’s views regarding nudity on screen and whether they agreed with the BSA’s recent decisions on complaints relating to nudity on screen. The research found:

BSA Chief Executive, Belinda Moffat said, ‘The research reflects that nudity and sexual media content is a pervasive part of the content landscape. It is part of a body of content that may inform and entertain, but it also has the potential to harm children and young people. Our focus is to engage with and educate broadcasters and the public, particularly parents and caregivers, to ensure that these harms may be mitigated. We will support increased media literacy so that New Zealanders can navigate the complex content world in which we all live without harm. We will work with broadcasters to increase the effectiveness of classifications and warnings, including raising awareness of tools such as parental locks to help viewers manage or restrict content.’

‘Importantly, we will collaborate with other agencies who also seek to promote the wellbeing of children and young people and protect them from harm. These research reports help us and broadcasters understand the potential harms to children from nudity and sexual media content and provide us with information and insights we can use to avoid or mitigate those harms’.

The full research reports are available at:

The Research reports are:

The decisions which were subject to litmus testing were: 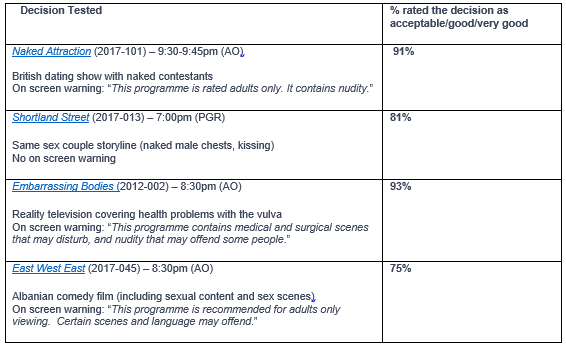 ABOUT THE BROADCASTING STANDARDS AUTHORITY

We have published the results of two research projects considering nudity on screen: Literature Review: Impacts on Children and Young People of Exposure to Nudity on Television and other Media, 2019…