BSA news and media releases including the BSA Pānui newsletter

All News and Media Releases

Over two evenings on Humm FM 106.2, a host discussed his personal dispute with the complainant. The host made denigrating comments about the complainant, who had previously worked as a DJ at a Humm FM community event.

The Authority found that the comments were likely to reflect negatively on the complainant and to impact his reputation, and he should have been given an opportunity to respond to the comments made about him, prior to broadcast.

“[The host’s] comments were not limited to the complainant’s professional performance, but moved into more personal statements against him, including allegations about his character,” the Authority said. “In our view, [the host’s] response against the complainant, broadcast on air, was disproportionate and unprofessional.”

The Authority noted that the right to broadcast carries with it privileges and responsibilities, including reasonable consideration of anyone who might be affected by a broadcast.

“In this case, the host relied on his position and used the Humm FM platform to air his personal grievances against a competitor, without allowing them the ability to respond or defend themselves.”

Despite being made aware of the issue prior to the second broadcast, the broadcaster took no steps to mitigate the potential harm or to provide the complainant with an opportunity to comment.

In reaching its decision, the Authority acknowledged that, in New Zealand, we value the right of individuals to express opinions or ideas, even where those ideas might be unpopular or rude.

“We place a high value on the right to freedom of expression in our society, which means that at times, the exercise of that right might cause offence or harm. However, this must not be undue harm. Broadcasting standards exist as a guide to broadcasters in how to balance these competing interests,” the Authority said. “In this case… we consider that the value and public interest in the broadcast did not outweigh the harm that could be caused to the complainant’s professional and personal reputation.”

The Authority ordered the broadcaster to pay $750 in costs to the Crown, acknowledging that while the breach and resulting harm was serious, Humm FM is a small broadcaster with limited resources and with few previous complaints against it.

The Authority did not uphold the complaint under the privacy standard, finding that no private information or material about the complainant was disclosed during these broadcasts.

ABOUT THE BROADCASTING STANDARDS AUTHORITY

If the BSA upholds a complaint, it may make orders. Orders may include: 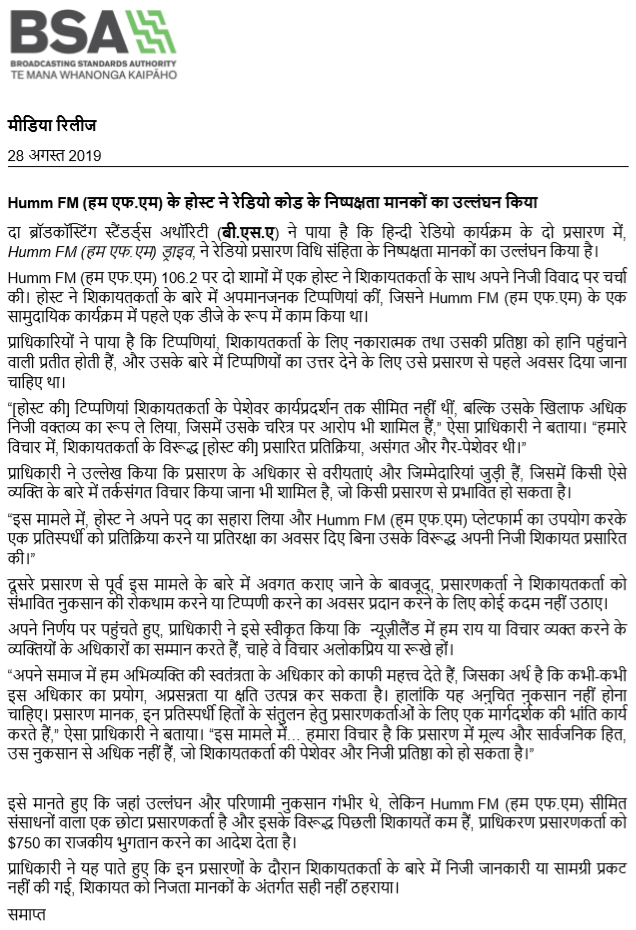 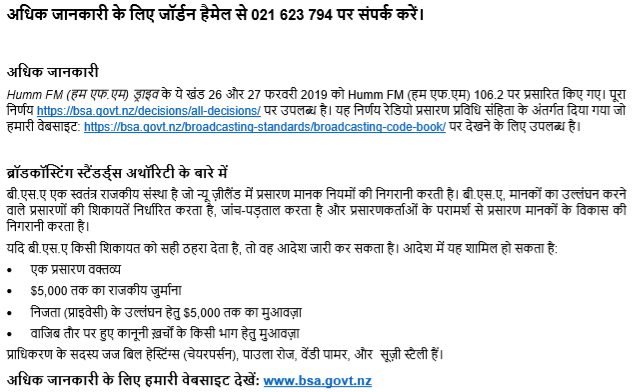 The Authority has released eight new decisions today, with one decision not upholding a complaint about a broadcast of Saturday Morning on Radio New Zealand.